Deprecated function: The each() function is deprecated. This message will be suppressed on further calls in _menu_load_objects() (line 569 of /home/dsnet/public_html/amagicalhistorytour.com/drupal/includes/menu.inc). 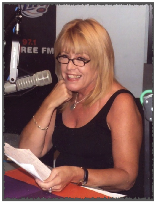 She is a British transplant born in Wallasey, which is a ferry ride cross the river Mersey from Liverpool, the birthplace of the most famous band in history, The Beatles. Growing up in Merseryside, music was a big part of her life, and one of her favourite things to do, was to attend concerts at the Liverpool Stadium, the Empire Theatre, and various other venues in the city.
While traveling extensively throughtout Europe, her first foray into radio began in Lake Como, Italy as a late night guest commentator on Radio Como. She later moved to the United States, where she wound up in Los Angeles in the 90′s, socializing and becoming familiar with many famous musicians, which led to a stint as music editor for the well known newspaper the British Weekly.
Gillian has been the voice of Beatles news for the past six years, reporting Beatles news with 97.1 KLSX and 95.5 KLOS Breakfast with the Beatles, senior correspondent on Britsound Radio, and news reporter on Beatlesradio.com.

She has reported the news from a variety of towns, cities and states, along with several European countries, including March 2005′s ‘Live from Abbey Road’s Studio 2 in London’ that included a walk across t

he famed zebra crossing during the broadcast. Due to her diligent research and British connections, she was the first news reporter in Los Angeles to break the Paul and Heather McCartney split several weeks before it was officially announced by the media.
During many years of Beatles news reporting and working as a music editor, she has interviewed many famous musicians – Neil Innes (The Rutles, Monty Python), Paul Rodgers (Bad Company, Free, Queen, The Firm), Chris Spedding (Roxy Music, The Sharks), Roy Harper (lead vocals on Pink Floyd’s “Have a Cigar”), Rod Stewart, Colin Blunstone (The Zombies), Russell Mael (Sparks), Steve Jones (Sex Pistols), Ian Hunter (Mott the Hoople), Brian Ray (Paul McCartney), Ian Gillan (Deep Purple), Spencer Davis, Demis Roussos, and Patty Boyd. She has been fortunate to meet many people connected to the Beatles – Paul & Linda McCartney, McCartney children, Ringo Starr, Neil Aspinall, Dhanni Hariison, Denny Laine, Henry McCullouch, Laurence Juber, Peter & Gordon, Joey Molland (Bad Finger), and numerous others.
Gillian has been a lifelong fan of the Beatles. While living in LA she has discovered many places connected to the Beatles. Her love and admiration of the Fab Four allows her to share this knowledge, taking you on a tour of Los Angeles to places that are part of the Beatles history.